On examination the patient had few puncture wound and laceration with swelling. The hand is swollen and possibly having some crush injury of the underlying tissues and also the infection. 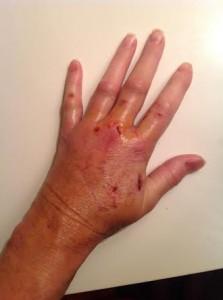 Dog bite can impair the body’s function. For example, a laceration to a hand may look bad, but more important than the potential scarring would be a lacerated tendon  that would prevent a finger from moving. Dog bite is less severe than cat bite. Dog bites inoculates the bacteria deep into tissue and majority of dog bites do get infected. Common bacteria involved in such infections include Streptococcus, Staphyococcu and Pasteurella. 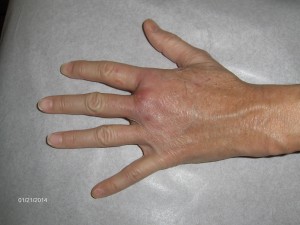